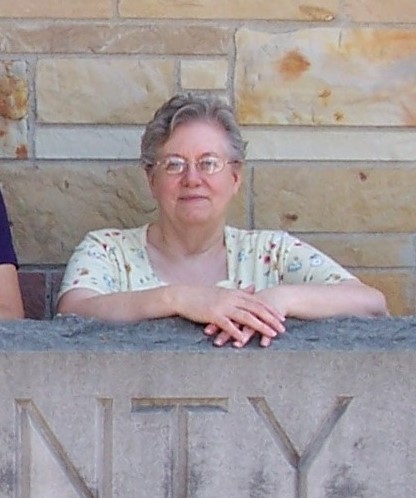 Vickey was the Director of the Owen County Public Library for 16 years and a member of the Monroe County Community School Board from 1994 to 2006. She belonged to the Church of Jesus Christ of Latter-day Saints.

Vickey is survived by her husband, John Freeland, daughter, Emily Freeland, and sons, William and Jonathan Freeland, plus 6 grandchildren.

Vickey became Director at OCPL just as the transition was being made from the Old Carnegie Library to the new Montgomery Street address.    She was immediately handed many tasks and problems which she handled with grace.  The story of obtaining grocery carts to move the books because hiring a mover was considered too costly by the board, has become a Vickey Freeland legend that is told every time the subject comes up.

By the time I was hired, 16 years later, she had plans and ideas for the future that she was anxious to pass on to me.  The remodel that had converted this building from a bank into a library in 1997 did not cover many basic problems with the building,  and she encouraged me to take advantage of the opportunity we had to remodel again to replace aging mechanicals, plumbing, and other problems, but also to move into the future of library needs and processes.   She taught me to keep looking to the future.

In addition to keeping her eye to the future needs of the facility, and the future purposes of libraries, she was also concerned with the future development of the staff both as employees and as individuals.

I only got to spend a few days with Vickey, but I filled a notebook with the information she wanted to leave with me.  In addition to the days I spent in her office with her, she invited me to attend a board meeting and the staff Christmas dinner.  I did, and I did my best to observe how she interacted with the staff and the board.

I admired what I saw as her laid back, but responsible approach to the director’s job.  She had no problem with saying “I don’t know”, but with that came the determination to find out,  and to get back to the questioner with the answer.    I admired that and have tried to emulate it.

Her focus was always on the library as a source of education for the community, from the cradle to adult education.  She was involved in promoting lifelong learning in a variety of different ways throughout the years, resulting in bringing Adult Education in-house, making it a department of the library to this day.

She was determined to make the transition from one director to another a smooth one, and she did her best to have everything in order and easy for me to access.  She had spent the time to make notes so that she was prepared to inform and prepare me.  I appreciated that so much, as neither of the libraries I had worked in previously had directors who made any preparation for what would happen after they left.  When it is time for me to retire, I plan to follow her example,

We may have painted over the “oatmeal” colored walls, but Vickey’s influence can be found throughout the library to this day, and those of you who knew her longer and more closely, can probably point out the many ways she influenced the library better than I.

If any of you would like to add to this memorial to Vickey, please send us your thoughts.